Hepatology is the branch of medicine related to the liver, gallbladder, biliary tree, and pancreas as well as management of their disorders. Although traditionally considered a sub-specialty of gastroenterology, today we have doctors specializing solely on this area, and they are called hepatologists.

Diseases and complications related to viral hepatitis and alcohol are the main reason for seeking specialist advice. More than 2 billion people have been infected with Hepatitis B virus at some point in their life, and approximately 350 million have become persistent carriers. Up to 80% of liver cancers can be attributed to either hepatitis B or Hepatitis C virus. In terms of mortality, the former is second only to smoking among known agents causing cancer. With more widespread implementation of vaccination and strict screening before blood transfusion, lower infection rates are expected in the future. In many countries, though, overall alcohol consumption is increasing, and consequently the number of people with cirrhosis and other related complications is commensurately increasing.

Endoscopic procedures for the care of liver patients are performed by well qualified and trained gastroenterologists. Complex endoscopic procedures like band ligation for bleeding varices in a cirrhotic, ERCP for a variety of biliary problems, sclerotherapy for control of ulcer bleeding etc are done. We also have capsule endoscopy and liver dialysis system (MARS) under the ambit of Hepatoenterology.

Apollo Hospitals now offers a novel and unique facility,
the Apollo Fatty Liver Clinic. This clinic will offer a comprehensive assessment, counseling and therapy for patients with fatty liver. Special packages will be available and patients can seek advice from a liver specialist, dietician and will also be counseled on lifestyle changes, exercise, weight loss etc. Tailored diet charts and exercise programs will be arranged according to each individual’s requirement. Patients are also registered for regular follow up to monitor their progress, and will be linked with other specialists like Diabetologist
and Cardiologist as necessary.

Dr. N Murugan, Hepatologist, Apollo Hospitals says “Non-alcoholic fatty liver disease is a very common but important problem, as up to 20% can develop serious liver damage. It is important for those with fatty liver to have periodic assessment of risk factors and staging of liver disease, as this is the best way to prevent complications. The key is also in maintaining a healthy lifestyle with proper diet, plenty of exercise and weight management”

Non-Alcoholic Fatty Liver Disease (NAFLD) is a condition where fat builds up in the liver even without alcohol take. When more than 5% – 10% percent of the liver’s weight is made up of fat, it is called a fatty liver (Steatosis).

Fatty liver has risen alarmingly owing to genetic predisposition (insulin resistance) coupled with changing lifestyle. Unless problem is addressed in time, it can result in significant liver damage for those affected”.

Who is primarily at risk?

Patients who have the following – Type 2 Diabetes, High Blood Pressure, are Overweight or suspected Metabolic syndrome

What is Metabolic Syndrome?

This is a condition that includes the presence of central obesity (fat in the belly area), Hypertension, Diabetes or impaired fasting sugar, high Triglycerides (a type of blood fat) and low HDL (the good cholesterol). Patients with metabolic syndrome have a higher likelihood of fatty liver disease and are at greater risk of having progressive liver disease.

Stages of NAFLD and risks

Stage 1: Simple fatty liver (simple steatosis) – when the liver has excessive fat of more than 10% without any significant damage or scarring. The majority of people are in this stage, and usually do not develop any serious liver damage.

Stage 2: Non-Alcoholic Steatohepatitis (NASH) – this is a more serious.The liver gets inflamed, followed by liver cell swelling and damage, leading to cell death. This can progress to liver fibrosis, liver cirrhosis, requiring a liver transplant

Stage 3: Fibrosis – some people with NASH can develop scarring of the liver called fibrosis. This gradually replaces healthy liver tissue, and can lead to further liver damage.

Stage 4: Cirrhosis – this is the most severe stage where the entire liver is replaced with bands of scar tissue. The liver becomes hard and may shrink. Over time, this often leads to loss of liver function, cause liver failure, and even liver cancer.

NASH is a serious complication and can occur in up to 20% of patients with fatty liver. NASH is more likely to occur in patients older than 50, women and those with full blown metabolic syndrome. NAFLD increases the risk of liver damage and is associated with an increased risk of cardiac disease and diabetes”.

NAFLD is often silent – which is why it is important to perform the necessary tests regularly to track the conditions of the liver. Patients do not experience any specific complaints in the early period, and even with advancing fibrosis, the disease may not cause any problems. In the later stages, patients may feel non-specific symptoms such as vague right sided abdomen pain, fatigue, tiredness, and some mild weakness.

It is only after developing cirrhosis and liver failure, that patients may experience obvious problems such as swelling of feet or abdomen, blood vomiting, impaired memory and periods of confusion, easy bruising or excessive bleeding after minor injuries, loss of muscle mass, increasing jaundice, frequent infections and eventually coma.

Liver cancer too can develop silently, and many times diagnosed only on routine scans such as ultrasound.

NAFLD is initially diagnosed by ultrasound and blood tests may show high levels of liver enzymes (liver function tests). Additional tests are often done to rule out other liver diseases.

How can NAFLD be assessed?

Ultrasound picks up fat when it is more than 30%. Once fatty liver has been diagnosed the key is to determine whether the patient may have any serious liver disease. Liver biopsy is sometimes used to diagnose these advanced stages of the disease.

For patients requiring hospitalization, we have a dedicated Hepatobiliary critical care unit, a Hepatobiliary physician on-call, anesthetists and a specialized O.R. nursing team. Our focus is on providing experienced, personalized care for all our patients. Our doctors are trained at the world’s most renowned centers in Hepatobiliary surgery and Liver Transplantation and are actively involved in clinical research.

Our team of surgeons, interventional endoscopists, radiologists and hepatologists work together to provide surgical treatment for the following disorders:

The biliary tract includes the liver, gall bladder and bile ducts. They work together to make, store and secrete bile. Bile consists of water, electrolytes, bile acids, cholesterol, phospholipids and conjugated bilirubin. Bile is secreted by the liver into small ducts that join to form the common hepatic duct. Between meals, secreted bile is stored in the gall bladder, where 80%-90% of the water and electrolytes can be absorbed, leaving the bile acids and cholesterol. During a meal, the smooth muscles in the gallbladder wall contract, leading to the bile being secreted into the duodenum.

Disorders of the Pancreas

The pancreas — a spongy, tadpole-shaped organ located behind the stomach — makes enzymes our bodies need to digest food and hormones to regulate blood sugar levels.

These make up the vast majority of all pancreatic cancers (around 90%) and come from the cells that line the ducts in the pancreas which carry digestive juices into the intestine. These are called pancreatic ductal adenocarcinomas.

Radiofrequency ablation and chemoembolization of liver tumors and cancers

Radiofrequency ablation, sometimes referred to as RFA, is a minimally invasive treatment for cancer. It is an image-guided technique that heats and destroys cancer cells. Imaging techniques such as ultrasound, computed tomography (CT) or magnetic resonance imaging (MRI) are used to help guide a needle electrode into a cancerous tumor. High-frequency electrical currents are then passed through the electrode, creating heat that destroys the abnormal cells. Some common indications for RFA are: 1) hepatocellular carcinoma, which is a primary liver
cancer; 2) colon cancer that metastasizes or spreads from the colon to the liver. RFA is an effective liver cancer treatment for patients who might have difficulty with surgery or those whose tumors are less than one and a half inches in diameter. The success rate for cure of liver cancers where the liver tumors are small, is greater than 85 percent.

Your doctor will instruct you on how to prepare. Inform your doctor if there’s a possibility you are pregnant and discuss any recent illnesses, medical conditions, allergies and medications you’re taking. Your doctor may advise you to stop taking aspirin, nonsteroidal anti-inflammatory drugs (NSAIDs) or blood thinners several days prior to your procedure and instruct you not to eat or drink anything for several hours beforehand.

Chemoembolization is a combination of local delivery of chemotherapy and a procedure called embolization to treat cancer, most often of the liver. Anti-cancer drugs are injected directly into the blood vessel feeding a cancerous tumor. In addition, synthetic material called an embolic agent is placed inside the blood vessels that supply blood to the tumor, in effect trapping the chemotherapy in the tumor.

Chemoembolization delivers chemotherapy drugs directly to a tumor, while minimizing exposure to healthy tissues. This delivery method minimizes side effects, like nausea and vomiting, and maximizes the cancer-killing properties of the drugs.

During chemoembolization, chemotherapy is injected through a catheter directly into a tumor using image guidance. The chemotherapy drugs are mixed with particles, called microspheres, which block the flow of blood to the tumor. Without a blood supply, the tumor no longer has the oxygen and nutrients it needs to grow.

Chemoembolization allows high doses of chemotherapy drugs to be targeted directly to the cancerous tissue for a longer period of time, without exposing the entire body to the effect of the drugs.

Unlike other organs, the liver has two blood supplies  the portal vein that feeds most normal liver cells and the hepatic artery that feeds cancer cells in the liver. This unique feature of the liver allows your doctor to kill the cancer cells while sparing the healthy tissue.

The treatment of gallstone disease, both open and laparoscopic gall bladder removal and surgical management of biliary disorders are the common procedures.

Palliative and curative resections for biliary cancer and palliative drainage procedures are performed. Combined liver and bile duct resection for advanced bile duct cancers are being performed regularly. Patients who have inoperable diseases are offered various palliative measures like stenting or bypass procedures.

The goal of portal hypertension treatment is to reduce high blood pressure in the portal vein, the blood vessel that connects the intestines and the liver, and prevent abdominal bleeding. Portal hypertension usually results from various types of cirrhosis (scarring in the liver).

Portal hypertension can cause tiny, thin-walled veins at the base of the esophagus and in the stomach to break and bleed. At this point they are referred to as varices. Physicians usually choose to control varices with medications or endoscopy. Endoscopy involves the insertion of a fiber-optic viewing tube into the gastrointestinal tract. Once the source of variceal bleeding is located, physicians use one of the following endoscopic techniques to control the varices:

Endoscopic techniques stop bleeding in 90 percent of patients. When medical and endoscopic treatments have failed to control bleeding, portal hypertension surgery may be indicated. The surgery creates an alternate pathway for venous blood flow, called a shunt, to relieve portal hypertension and bleeding varices. The surgical procedure that is most commonly used is called distal splenorenal shunt (DSRS).Alternatively, a minimally invasive treatment called transjugular intrahepatic portosystemic shunt (TIPS) may be appropriate for some patients. 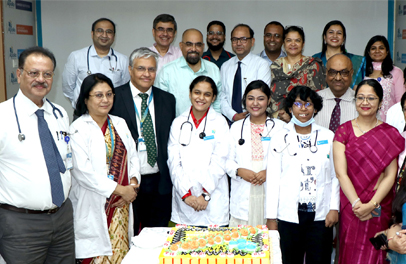