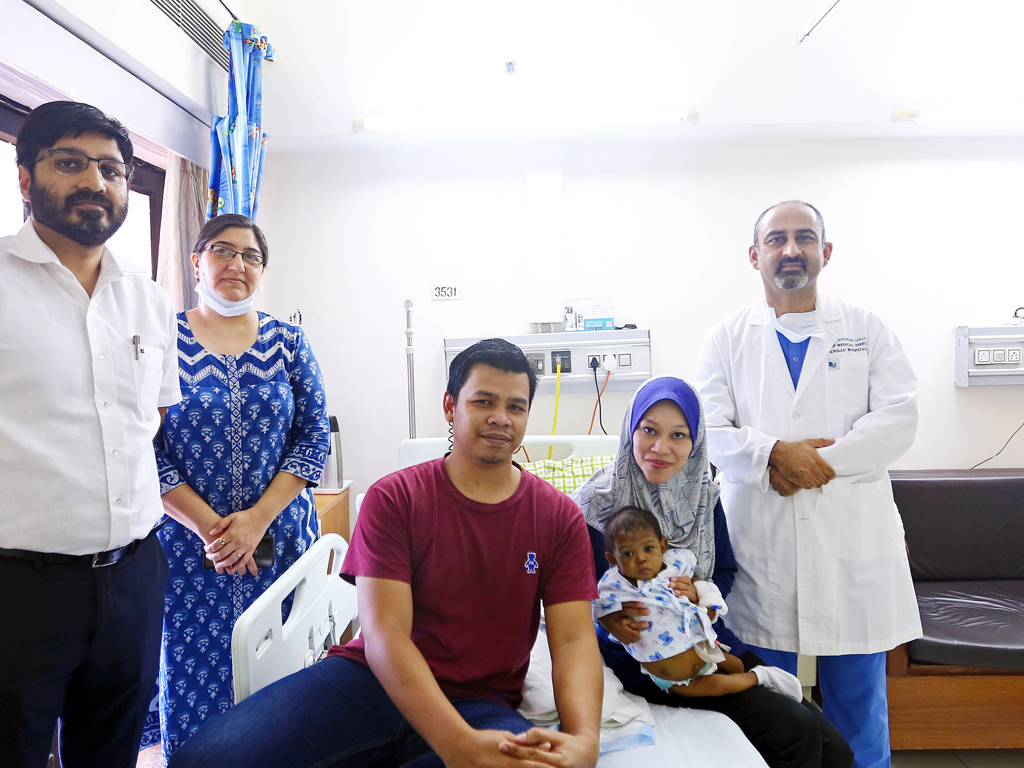 The team of doctors at Indraprastha Apollo Hospitals performed a complicated liver transplant surgery on a 10-month-old, Baby Noor from Malaysia. Baby Noor, soon after birth had developed jaundice that advanced with time and was further diagnosed with biliary atresia, a rare liver and bile disease which has a ratio of 1:12000 in infants worldwide. In addition to this, Noor also had heterotaxy, an abnormal arrangement of the internal thoracic-abdominal organs across the left-right axis of the body. Her liver and stomach were in the middle of the abdomen and her heart was in the middle of the chest.

At about 2 months of age, Baby Noor underwent a Kasai surgery that connects the under surface of liver directly to the intestines to achieve biliary drainage. She also underwent abdominal surgery to correct intestinal malrotation. However, both the surgeries were unsuccessful.

According to Dr. Anupam Sibal, Group Medical Director, Apollo Hospitals Group and Senior Paediatric Gastroenterologist & Hepatologist, Indraprastha Apollo Hospitals, “If Kasai surgery fails to clear jaundice, then the only treatment is a liver transplant. Noor fell into this category of failed Kasai and developed progressive liver failure leading to severe jaundice, a bloated belly with ascites, growth failure, bleeding episodes due to liver dysfunction and increased pressure in the veins supplying her hardened liver. She was hospitalised in Kuala Lumpur multiple times, and once during her treatment she suffered a massive gastro-intestinal bleed in February, leading to a near death like situation. Initially her transfer to India was cancelled as she was on ventilator but since it was a very high-risk case requiring immediate surgery, she was referred to us.”

According to Dr Neerav Goyal, Senior Consultant and Head, Apollo Liver Transplant, Hepatobiliary and Pancreatic Surgery Unit, Indraprastha Apollo Hospitals, “The day after the family landed in Delhi, an advisory was issued by the Government of India to quarantine all travellers from Malaysia for a minimum of two weeks. It was an ethical dilemma for the team of doctors and nurses, as we were not hopeful that Baby Noor could survive so long without immediate treatment. The team acted quickly and put the family in quarantine, for a period of two weeks post which the liver transplant was planned.”

“Meanwhile Baby Noor developed a rhythm disturbance with a very slow heart rate while awaiting a transplant. She immediately required a temporary pacemaker. Post the quarantine period, after testing for SARS-COV- 2 which was negative and taking all precautions including PPE, she underwent a living related liver transplant on 31st March 2020. The donor was her mother. At the time of the transplant, Noor had a bilirubin level of about 45 mg/dl as against a normal of less than one. Her weight was only 6.5 kg at the age of 9 months.” Said, Dr Smita Malhotra, Consultant, Paediatric Gastroenterologist & Hepatologist, Apollo Hospitals, Apollo Hospitals Delhi.

We value the trust our patients. We have performed the most complicated of liver transplants (e.g., in babies weighing as less as 4 kilograms), combined liver–kidney transplants and multi-organ transplants,” Said Dr. Goyal.

Baby Noor smiled beautifully at the staff and the sparkle in the eyes of the parents hides all the torment they have been through. She has now been discharged and awaits her return to Malaysia.

The team of Apollo TeleHealth saved a 27-year-o...