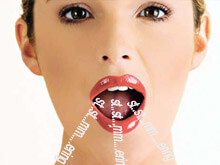 Stammering has always been a subject of scientific interest, curiosity, discrimination, and ridicule. Roman Emperor Claudius was initially shunned from the public eye and excluded from public office because of his stammer.

Lewis Carroll, the author of Alice in Wonderland, was afflicted with a stammer, as were his siblings. Prophet Moses whom the Christians, Muslims and Jews respect, was also a stammerer placing a burning coal in his mouth had caused him to be “slow and hesitant of speech.” Closer home, actor Hrithik Roshan had once confessed that he still practices at night to overcome his stammering, something he was treated for from 14 years of age. Stammering and stuttering mean exactly the same thing: stammering is the British usage, while stuttering is its American equivalent. Whichever name you call it by, it is important to watch out for the signs of stammering, so that the person can be helped out of it.

Primary stammering behaviours are the overt, observable signs of speech disfluency including repeating sounds, syllables, words or phrases, silent blocks and prolongation of sounds. Repetition occurs when a sound, syllable, word, or phrase is repeated, and are typical in children who are beginning to stammer.

When a child is unnaturally lengthening continuant sounds, like when saying “mmmmmmilk,” it is called a prolongation, and this is common in children beginning to stammer. Silent blocks refer to the inappropriate cessation of sound and air, often associated with freezing of the movement of the tongue, lips and/ or vocal folds. Blocks often develop later, and can be associated with muscle tension and effort.

When the child recognises that he/ she has a stammer, their secondary behaviour kicks in – including escape behaviours, in their attempt to terminate a moment of stammering. There might be physical movements such as sudden loss of eye contact, eye-blinking, head jerks, hand tapping, interjected ‘starter’ sounds and words, such as “um,” “ah,” “you know”. Such covert stammerers often have high levels of anxiety, and extreme fear of even the mild disfluency.

Feelings of embarrassment, shame, frustration, fear, anger guilt are frequent in stammerers, and may actually increase tension and effort, leading to increased stammering. With time, continued exposure to difficult speaking experiences may crystallize into a negative self-concept and selfimage. Such negative feelings and attitudes may need to be a major focus of a treatment program.

Stammering is typically noticed as a developmental disorder beginning in early childhood and continuing into adulthood. It takes about 30 months to develop as a readily identifiable stammer. When parents ask the child to “slow down”, “take a breath”, “say it again”, etc it increases the child’s anxiety and fear, leading to more difficulties with speaking.

Stammer can also be acquired. A neurological event such as a head injury, tumour, stroke or drug abuse/ misuse can cause it. Traumatic experiences like bereavement, breakup of relationships or a psychological reaction to physical trauma might also be a cause of psychogenic stammer.

Speech therapy:Stammerers can be trained to speak fluently by controlling their breathing, phonation, and articulation (lips, jaw, and tongue). They are trained to reduce their speaking rate by stretching vowels and consonants, and using other fluency techniques such as continuous airflow and soft speech contacts. The result is very slow and monotonic, the type used only in speech clinics. Gradually, these fluency skills are mastered which increases the speaking rate and intonation. This more normal-sounding, fluent speech is then transferred to daily life outside the speech clinic. Speech therapy is often taught in group therapy programs, which may take two to three weeks to complete.

Stammering modification therapy:The goal is not to eliminate stammering but to modify it to become less effortful and easier. The steps include identification, desensitisation, modification and stabilisation.

About 65 percent of preschoolers who stammer are seen to recover spontaneously in the first two years of stammering, and about 74 percent recover by their early teens. In particular, girls seem to recover well. Early intervention is effective in helping the child achieve normal fluency. Once stammering has become established, and the child has developed secondary behaviours, the recovery gets more difficult. Only 18% of children who stammer after five years recover spontaneously so parents, do listen to your children!

Stammerers often can learn to stammer less severely and be less affected emotionally. Apart from psychotherapy and counseling, relaxation techniques, breathing exercises, methods like parallel reading or shadow reading can enable the person to know his weak points to be guided by the therapist to tackle them.

To quote a popular Hrithik Roshan anecdote, once he was out on a dinner date with his future wife Suzanne, way before his first movie. But stammer caught his tongue so much that he could not speak even one word, let alone place an order that night. Suzanne understood the situation and ordered for them both, without making a fuss about it. That supposedly, is the moment Hrithik fell for her. Two children and many movies later, they are still very much in love. Moral of the story: stammerers need love and acceptance first, and then, a therapist. For as the song goes, “You say it best when you say nothing at all”