In what can be considered a historical case, Apollo Speciality Hospitals in Vanagaram announced the successful separation of Pygopagus twins from Tanzania – Ericana & Eluidi. A marathon surgery of 18 hours conducted by a select team of 20 doctors from the specialties of neurosurgery, plastic surgery, paediatric surgery and paediatric urology was led by Dr. Venkata Sripathi, Senior Consultant Paediatric Urologist, Apollo Children’s Hospital, Dr. Roshini Gopinathan and Dr. K S Sivakumar, Senior Consultant Plastic Surgeons, Apollo Children’s Hospitals. The Surgery which began at 9:00 AM on December 16, 2013 concluded with the successful separation of the twin nine month old boys at 1:00 AM on December 17, 2013.

Born in a small village called ‘Kasumulu’ in Tanzania Ericana and Eluidi were referred to Apollo Hospital in Chennai through Apollo’s Save a Child’s Heart Initiative (SACHI) and have been under the expert care of skilled doctors at Apollo for five months now. Both babies who can now look forward to leading normal lives as two separate individuals are currently recuperating in the Intensive Care Unit at Apollo’s Vanagaram facility. They have been stable and are showing signs of a promising and speedy recovery.

Commenting on the complex surgery, Dr. Venkata Sripathi said “It took us about 13 hours to separate the twins, post which reconstruction took another 5 hours. The most challenging moments were the spinal separation without injury to the nerves of either baby, separation of the fused phallus without nerve and vessel injury, separation of the urinary bladder and urethra followed by reconstruction of the pelvic floor around the rectum and anus, providing skin cover. In all it took us about 18 hours.”

“As of now the babies are stable, but are under observation in the critical-care unit, and we are expecting that they will be fit enough to be shifted to the ward in another 5 – 7 days. Once the babies begin to feed and void well and are active, they will be discharged. They will be brought back 6 months from now for hypospadias repair and colostomies” added Dr. Sripathi .

Dr. Edward Kiely, Paediatric and Neonatal Surgeon and Dr. Richard Howard – Anaesthetist both from Great Ormond Street Hospital in London were present to proctor the Apollo team during the course of the surgery.

“In our 30 years, Apollo Hospitals has always been a pioneer in healthcare delivery and has continued to excel with world-class clinical outcomes. The case of Ericana and Eluidi was both unique and challenging. We are glad to have had the opportunity to give their strong-willed mother Grace a reason to be truly happy after nine months of agony and anticipation. We have once again demonstrated our prowess as a global destination for affordable yet world class healthcare” said Dr. Prathap C Reddy, Chairman, Apollo Group of Hospitals . 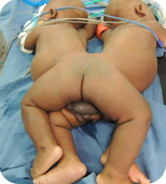