How to Spot Anaemia 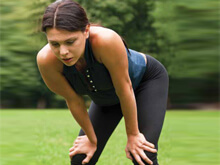 Anaemia is a condition where the Red Blood Cells (RBCs) of a person’s blood drop below normal. In a blood test, this is generally measured as a haemoglobin level below 12 grams per 100 ml blood or a heamatocrit level below 40 percent.

RBCs contain haemoglobin responsible for carrying oxygen to all the cells of the body. Thus, anaemia can cause lack of oxygen in various cells leading to various health problems.

Generally, decreased red blood cell production, increased RBC destruction or blood loss are the mechanisms responsible for anaemia. All conditions causing anaemia usually work through one of these mechanisms. Causes include:

In India, the commonest cause of anaemia is iron deficiency. The Indian diet is generally low in iron, making growing children, menstruating women, pregnant women and strict vegetarians (whose diet has less absorbable iron ) more susceptible to iron deficiency. Iron deficiency is also caused by slow, chronic blood leak such as from gastric ulcers (in India, a bacterial infection called helicobacter pylori is very common and causes such ulcers), tapeworm infestations in the gut, haemorrhoids (piles), heavy menses or cancers of the gut.

Iron deficiency anaemia is often the first sign of such a cancer! In an elderly patient with iron deficiency, it is mandatory to consider the possibility of an intestinal cancer.

Generally, most people do not experience many symptoms even when haemoglobin drops below 12 grams – until it drops to less than 10 grams or so. Early symptoms could include:

In cases where the haemoglobin drops to seven grams or less, people may have difficulty performing activities of their daily living. For instance, there may be difficulty moving around the house, in putting on clothes, cooking, or even in taking a bath. Anaemia starts affecting the cardiac muscles, as the heart starts doing more work trying to compensate for the depleted oxygen supply to the cells.

In cases where the haemoglobin is less than four grams, the patient may become prostrate, unable to perform any significant activity. There is the grave risk of heart failure and even death. However, it must be noted that symptoms depend not only on the absolute level of haemoglobin, but also on the patient’s general condition. Also, if anaemia develops more slowly the body adjusts and may not experience typical symptoms. Symptoms also depend on the cause of anaemia.

Treatment depends on the aetiology (cause of a disease) or the specific cause. The following could be some of the methods of treating anaemia: