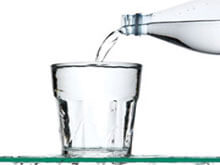 About 97 percent of the earth’s water is contained in the oceans and due to its salinity, cannot be used for drinking. of the 3 percent water that is potable, over 2 percent is captured within the ice caps of the Arctic and the Antarctica, which is not easily accessible.

This leaves us with 1 percent. More than half of this is subterranean and is contained in shallow and deep trenches below the surface of the earth. the balance 0.5 percent that is accessible and consumable is contained in our rivers and lakes.

Not mentioned above of course is a small quantity of water, less than 0.001 percent that is contained in the atmosphere in the form of clouds and that manifests itself as rain. The good news is that the quantity of water in the earth is more or less guaranteed to remain constant due to the hydrologic cycle of evaporation, cloud formation, condensation, precipitation, rainfall, percolation, ground water collection and evaporation once more. The bad news is that water contamination by industry, through the release of effluents and toxins into our rivers and lakes is further reducing the percentage of accessible drinking water.

Municipal drinking water is obtained from an approved source (surface, subterranean). This is filtered and disinfected and made available as drinking water. By law, the total dissolved solids in the water cannot exceed 500 mg/litre. Natural water is obtained from the surface or underground sources. It refers to a non municipal supply in which the dissolved solid materials have not been changed. However, filtration of disinfection is done according to specifications, if the water is to be bottled in commercial usage.

Well wateris drawn from the earth, either through a shallow well or by a bore well. The depth of these wells can range from 30 ft to 500 ft depending on the underground water table. Disinfection by boiling, and filtration by straining is selectively done depending upon the education standards of the consumers.

Spring water is different from well water in the sense, that even while starting from an underground source, the water flows naturally to the surface, from which it is drawn. Both spring water and well water are generally consumed without boiling and filtering. This is not advisable as these waters contain many local dissolved materials and bacteria.

Purified water is bottled water that has been purified either by distillation, deionization or Reverse osmosis. In distillation, the water is heated and vaporized with condensation, and the residual water is free from any solvents or minerals.

Deionisation is a process in which the water is treated with resins, which remove over 95 percent of dissolved minerals. Reverse osmosis requires that water be forced with high pressure through membranes. This removes upto 90 percent of dissolved solubles. Soda water is water treated with carbon dioxide and converted into a fizzy drink. This comes under the category of aerated water rather than drinking water.

With all these different types of water to drink, which is best? Clearly there are municipal laws that define the standards of drinking water and by and large, all the waters mentioned come within the standards and can be drunk. However of late, there is a lobby of purists who believe that except for distilled water, which is free from all minerals and residue, no other water is healthy for human consumption. They also vouch that the mineral content in water is what largely accounts for hardening of the arteries, stiffening of the joints, calcification of all organs and accelerated ageing.