Apollo Hospitals’ comprehensive care is supported by technology and innovative techniques in High Precision Radiation oncology. High tech radiation oncology is used to treat not only small tumours located in critical areas but is useful in large tumours as well. Experts at Apollo, from a range of disciplines, come together to assess a patient’s suitability for the therapy, which is delivered using a number of precisely-targeted stereotactic beams. The 4-dimensional CT scanner is useful in planning treatment to track the tumour’s position as it moves when the patient breathes, guaranteeing a high degree of accuracy and potentially fewer side effects by limiting irradiation of the surrounding normal tissues. 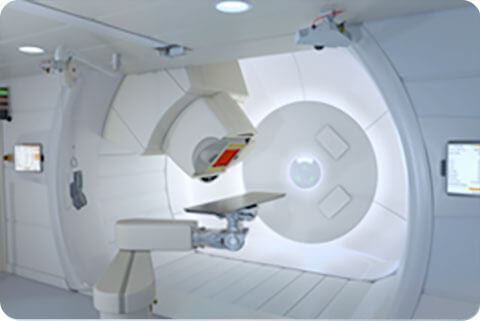 Furthermore a superlative advantage is its proper dose distribution. A low dose of radiation is released at the body surface which is followed by a sharp burst once it hits the tumor, with negligible radiation travelling beyond the target. The protons can deliver highly conformal radiation to any shape, volume or depth of the tumor by controlling the delivery of their entire energy to the so-called ‘Braggs Peak Region’

Proton Beam Therapy has revolutionized the treatment of several cancers like paediatric cancers, skull base tumors, brain tumors, prostate cancers, and lung cancer to name a few. It becomes a viable option, particularly in cases where treatment options are limited and conventional radiotherapy possess a higher risk to patients. Proton beam therapy has to a large extent, overcome the limitations of conventional radiotherapy. It has the potential to cure more cancers with better quality of life, during and after treatment. The TrueBeam STx system is an innovative solution that is fast and powerful, giving clinicians the ability to navigate the complexities of cancer care with confidence, including challenging cancers of the brain, spine, lung, liver and prostate. TrueBeam STx combines imaging, beam delivery and sophisticated motion management to accurately and precisely target tumours with speed. Read More

Varian’s Truebeam STx with Velocity is an advanced radiotherapy system engineered to deliver more powerful cancer treatments with speed and precision. The latest technology is engineered to deliver high doses with accuracy while protecting nearby healthy tissues and critical organs. Read More Novalis is the latest technology in radiation oncology which is the most advanced cancer treatment available and is changing the face of cancer treatment. It comes with the advantage of maximizing tumour destruction while minimizing damage to the normal tissues, and offers hope to patients with clinical conditions once considered untreatable. Novalis Tx Radiosurgery incorporates a powerful linear accelerator, which rotates around the patient to deliver treatment beams anywhere in the body from virtually any angle. A set of sophisticated image guidance and motion management tools provide clinicians with detailed information about the shape, size and position of the targeted lesion, guide patient setup and positioning and monitor motion during treatment.

The CyberKnife consists of a lightweight linear accelerator mounted on a robotic arm. Near real-time images allow for patient movement tracking within a 1mm spatial accuracy. The CyberKnife references the position of the treatment target to internal radiographic features such as the skull, bony landmarks or implanted fiducial rather than a frame. The CyberKnife uses real-time X-rays to establish the position of the lesion during treatment and then dynamically brings the radiation beam into alignment with the observed position of the treatment target. The CyberKnife aims each beam independently. When the target moves, the robot detects the change and accommodates it. This treatment system has been used to successfully treat lesions in patients who are otherwise not candidates for surgery or for lesions that are not amenable to open surgical techniques.

Apollo Hospitals is amongst the bare few Tomotherapy centres in India that provides Tomotherapy treatment, a pioneering form of radiation therapy. Tomotherapy uses computed tomography (CT) guided intensity modulated radiation therapy (IMRT) for accurate treatment of cancer by targeting the radiation dose to the exact tumor shape. The state of the art system, used in combination with TomoHelical TM and TomoDirect TM radiation delivery, allows precision in the treatment of different kinds of organ specific cancers.

Tomotherapy treatment in India is fast gaining ground owing to the superior outcomes that it delivers for patients. It allows oncologists to monitor their treatment plan on a daily basis through low dose CT imaging which shows the extent of radiation on the tumor while minimising the effect on healthy tissues. With such close supervision on the planned treatment, it helps get the best results for the patients. Due to its multiple benefits, tomotherapy treatment is now one of the most preferred treatment route adopted by oncologists in India.

A set of CT images is used to identify both the tumour and the critical normal tissue structures that need to be avoided. Then, radiation beams of varying shapes are designed to enter the patient from multiple angles, and hit the tumour while avoiding nearby healthy tissues.

IMRT is a specialised form of 3D-CRT treatment in which not only the shapes of the radiation beams are varied, but their strengths or intensities as well. This further guarantees that the tumour receives the maximum amount of radiation, while the surrounding normal tissues receive the least possible.

This is a cutting-edge technique that combines X-ray imaging and radiation oncology, and allows the daily tracking of changes in both the location and shape of the tumour and healthy surrounding tissues during the course of treatment. IGRT promises to further improve the accuracy of radiation oncology.

Stereotactic radiosurgery (SRS) is a procedure utilising very accurate targeted radiation in large doses to effectively kill a tumour or destroy a lesion. It is a non-invasive procedure that has been used as an effective alternative to surgery or conventional standard fractionated radiation oncology for treating small tumours.

Stereotactic radiosurgery uses precisely focused radiation beams to treat tumours and other abnormal growths in the brain, spinal column and other body sites. Technology delivers high doses of radiation to the tumour with minimal exposure to the surrounding healthy tissue.