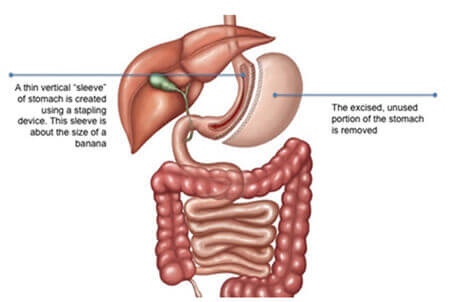 How is Sleeve Gastrectomy Performed?

Most sleeve gastrectomies performed today are performed laparoscopically. This involves making five or six small incisions in the abdomen and performing the procedure using a video camera (laparoscope) and long instruments that are placed through these small incisions.

Sleeve gastrectomy is a restrictive form of operation in which approximately 2/3rd of the left side of the stomach is removed laparoscopically using endoscopic staplers. The stomach thus takes the shape of a hockey stick or sleeve. It can be performed as either first stage of a two-stage procedure for super obese (BMI >60) where it can be followed with malabsorptive surgery or as a single stage procedure by itself.

The hour glass configuration only constricts the upper stomach thus acting as a pure restrictive operation. Since the outlet is small, food stays in the pouch longer and one also feels satiated for a longer time. Scheduled follow-up visits will be at 6 weeks, monthly for the first six months and yearly thereafter or as and when medically required.

Who Should Have a Sleeve Gastrectomy?

This operation has been used successfully for many different types of bariatric patients.

In patients who undergo LSG as a first stage procedure, the second stage (gastric bypass) is performed 12 to 18 months later after significant weight-loss has occurred, the liver has decreased in size and the risk of anesthesia is much lower. Though this approach involves two procedures, we believe it a safe and effective strategy for selected high-risk patients.

Sleeve Gastrectomy May be Performed for the Following Reasons:

How Does the Sleeve Gastrectomy Cause Weight-Loss?

Sleeve gastrectomy is a restrictive procedure. It greatly reduces the size of the stomach and limits the amount of food that can be eaten at one time. It does not cause decreased absorption of nutrients or bypass the intestines. After this surgery, patients feel full after eating very small amounts of food. Sleeve gastrectomy may also cause a decrease in appetite. In addition to reducing the size of the stomach, the procedure reduces the amount of the “hunger hormone,” ghrelin, produced by the stomach. The duration of this effect is not clear yet, but most patients have significantly decreased hunger after the operation.

How Much Weight-loss Occurs after LSG?

Several studies have documented excellent weight-loss up to three years after LSG.

What are the Risks of Sleeve Gastrectomy?

The risk of major post-operative complications after LSG is 5-10 percent, which is less than the risk associated with gastric bypass or malabsorptive procedures such as duodenal switch. This is primarily because the small intestine is not divided and reconnected during LSG as it is during the bypass procedures. This lower risk and shorter operative time is the main reason we use it as a staging procedure for high-risk patients.

Complications that can occur after LSG include a leak from the sleeve resulting in an infection or abscess, deep venous thrombosis or pulmonary embolism, narrowing of the sleeve (stricture) requiring endoscopic dilation and bleeding. Major complications requiring re-operation are uncommon after sleeve gastrectomy.