One Lakh Hands – one of India’s largest and most successful community sensitization platform on socio-cultural issues launched its campaign for the year, focused on someone dear to all of us, but often neglects herself – MOM, with the theme ‘She chases you for life, now chase her back for an active life’, on the occasion of Mothers’ day at Apollo Hospitals, Jubilee Hills. The occasion was graced by Ms. Sangita Reddy, Joint Managing Director, Apollo Hospitals; Actor & Model Mr. Milind Soman, accompanied by his mother Mrs. Usha Soman and Mr. Pullela Gopichand, Chief Coach, Indian Badminton. As part of the campaign, one lakh people will be directly enrolled for the adopted cause and they in turn would act as catalysts in bringing behavioural change and creating a ripple effect on the society.

For the year 2017, One Lakh Hands creators have chosen the cause of “Happy & Healthy Mom”. As per the National Health Survey 2016, Hyderabad is ranked no 1 in cases of women’s obesity in India. Mothers often tend to neglect their own health at the cost of their family’s well-being. Their health takes a backseat after childbirth. Most mothers are malnourished and are woefully short on physical exercise. They endure ill health and postpone seeking medical attention, just to avoid upsetting the daily routine at home. Often such neglect and sacrifices reflect at a later stage leading to chronic ailments as they get old.

The campaign started with a three-day art exhibition with works of Artist Kant Risa on the theme Mother & Child, on display at Apollo Hospitals. The guests and visitors at the well-attended launch program were presented with greeting cards with the imprints of the paintings to pen affectionate messages for their mothers. The launch was followed by a sustained campaign to further the cause and reach the message to a cross section of the society. As part of this, the expo will be taken to various Corporates, Hotels, educational institutions, besides hosting events all year round.

Apollo Hospitals, which always emphasized on disease prevention, as a health partner, will bolster this initiative by organizing regular talks on women health, workshops on preventive care, extend its internationally acknowledged health check programs at a subsidized price and support all the health and wellness activities, especially meant for mothers and women at large. 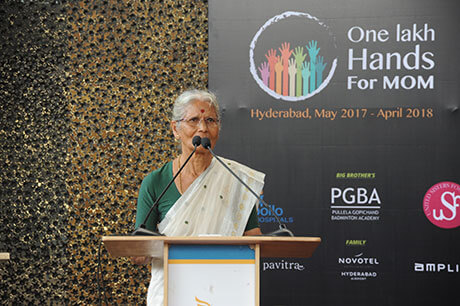 A Memorandum of Understanding (MoU) has been signed between Apollo Hospitals Group and Eclipse Group, Africa, to esta...